Collection of fabrics in the museum has more than 3,300 units. Folded and formed a collection since the museum’s foundation and includes church tissue samples and clothing, folk and secular clothing, household fabrics.

In the late twenties of the twentieth century, during the company to close the churches, many church fabric, fortunately came to the museum — it’s vestments, facial patterns and gold embroidery, covers with the relics of saints Murom. Widely known cover with the relics of Peter and Fevronia. In 1594 Tsar Fedor Ivanovich and Tsarina Irina (Godunov) sent him in Murom Cathedral of the Nativity of the Virgin. It was shit in the famous workshop of the queen. This is the most poetic work Tsarina «Svetlitsa» and is one of the best, most delicate and lyrical things that came out of this workshop. Sewing performed with extraordinary warmth and love, as the queen Irina Febronia especially revered as his holy and prayed to Peter and his wife for the gift of her children. Cover shield for expensive Italian Kamke blue linen and silk threads, halos executed spinning gold and silver.

Key national clothes were revenues from local collectors of antiques IS Kulikova, AF Scrooge and NG Dobrynkin, it is composed of material collected in 1927 in the vicinity of Moscow Murom expedition Anthropological Institute, in particular the well-known collector of GS Maslova. Most of the collections of folk costumes make up things from the collection of academic painting IS Kulikov (1875−1941). Part of his collection he donated to the museum, where at that time was working in 1923, and after his wife’s death — Elizabeth Arkadevna along with the artist’s canvases transferred in 1942 to the museum and garments. In the archives of the museum preserved complex documents with enough code-named «Entries IS Kulikov of the place of acquisition of the exhibits» featuring the artist’s close ties with the antique dealers (starinschikami), from whom he acquired the garments, icons, copper casting, wood carving and other things. Probably most of the northern provinces of clothing was purchased from Andrei Ivanovich Antonov of Vologda province, «which bought things over the Russian North». Systematically, his collection began to take shape since 1904.

Diverse collection presented beaded embroidery XVIII — early XX century: bags and purses, embroidery, air. By the end of the XVIII century fascination with beads moved from the professional sphere to the private life of the privileged classes. Passion for sentimentality in the arts is reflected in the beaded things, small gifts have become popular souvenirs (purses, bookmarks, cigarette holders, etc.).

The flowering of Russian beads — first half of XIX century. It was at this time most of the monuments created by applying all the different ways of working with beads — traditional weaving, embroidery, knitting and crochet with beads on the needles. Motifs for embroidery used a variety. Produced special drawings, schemes for embroidery. But the most popular motives were flowers. Complex floral arrangements often carry meaning, the first letters of the names (mostly French) down a name or message. In addition, many plants were regarded as symbols of certain concepts or feelings: rose — love, ivy — eternity, forget-me — a long memory, lily — purity and innocence, and so on. With the 30-ies of the XIX century fascination with beads in the capital began to weaken, but the provincial nobility was his right to the 1860s.

At the end of XIX — early XX century fascination with beads gets a new development — in vogue embroidery in art nouveau style. Collection of tissues was significantly updated in our days. The structure of the meeting includes materials obtained during ethnographic expeditions of the museum — towels, tunics, woven and braided belt, printed scarves and shawls, the museum collects clothing 50−70 years of the twentieth century. 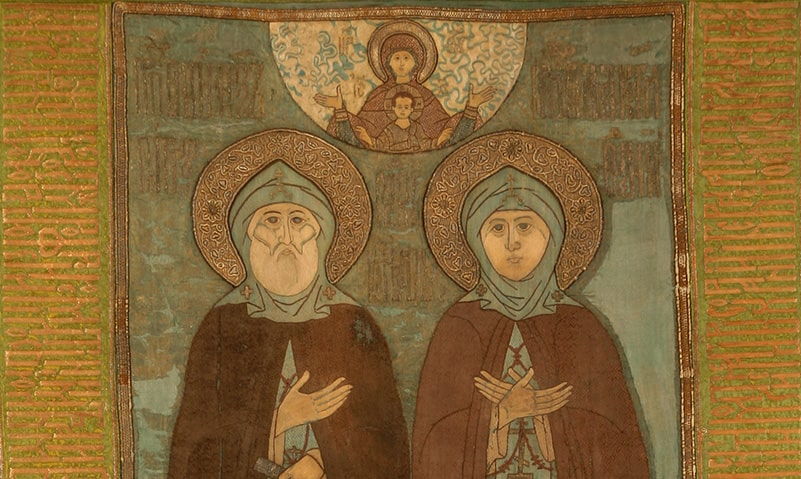